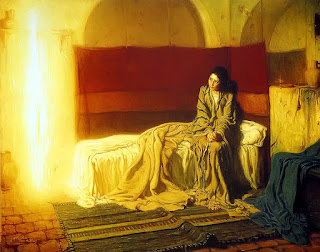 This time of year can bring both blessing and hassle.  Holy meditations, carols, the contagious wonder of wide-eyed children:  these unwrap great blessings and usually great fun.

For some of us, however, the activities of Christmas can feel like an intrusion.  Day to day life is more or less put on hold by an urgent need to shop and wrap and bake and write and plan and decorate.  Chairs and tables are displaced by, of all things, a tree in the middle of our house.  There's no time to do ordinary things, as everyday life is seriously disrupted for weeks on end.  It can all seem like a major interruption.


Last December, the truth of it hit me.  This is what Christmas has been since the instant of the Incarnation:  an interruption.  Please stay with me here, because our first reaction to the word “interruption” could be negative.  But interruptions are often quite positive, and this Interruption was the most positive of them all.

Think of it.  Mary was living a quiet, hidden life.   She was betrothed.   Then one day an angel appeared to her, and with that Holy Interruption Mary’s life was changed forever.  As was Joseph’s, as was yours, as was mine. As we know, there was a Birth.  There were shepherds tending their flocks, and again an angel appeared.  A night of sheep-watching was interrupted.

While most of the world went on unaware, a few men in the east noticed something out of the ordinary.  A sign in the sky.  Something signaling, to them, a wondrous Interruption – one so marvelous that they must drop any other plans they had and go in haste, and they must bring gifts.  These men were wise enough to know that somehow the world had changed, maybe even that the course of life on earth had been altered.

The change was so shattering that mankind took notice.  Calendars would later mark the divide.  God Himself had split the heavens.  We now measure time by the before and after of that Grand Interruption, in effect saying that yes, we see.  We may not understand, really, but we recognize the wonder and the mystery of it.  God interrupted the cycle of sin and death by breaking into our world (John 3:16).  Jesus broke into the flesh of man, shattering hopelessness with His power and mercy.

With Jesus' arrival in the flesh, God interrupted our misery.  He opened to us the path to salvation.

This is a slightly edited re-post, originally appearing on my other blog last December.