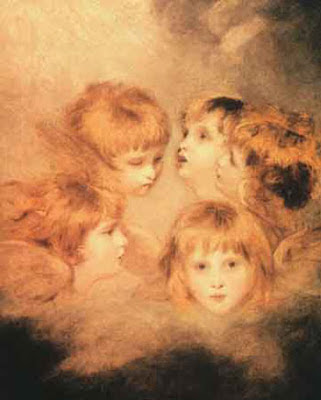 My son "Frankie" was five when he made what I hoped was not a hard-and-fast decision.

"I don't wanna go to heaven," he announced one day during lunch.  Frankie had Christmas on his mind, having just been in his preschool pageant.  He made his lunchtime declaration in much the same way he would have said I-don't-want-to-go-to-Gran's-for-the-holidays.

I got it.  Earth was the only home Frankie had ever known.  Heaven was a vast and mysterious place, perhaps scary to a child.  I tried to reassure my little one as he swallowed his Spaghettios.

Frankie just looked at me, and then went on to further explain his reasoning.  "There's ANGELS there!"

Oh.  Angels.  Now I really got it.  Frankie must have seen a picture, or maybe a Christmas program, and the huge powerful angels frightened him.  O, my poor boy!  I tried again to reassure him, spending time calming what I envisioned as paralyzing fears.  Frankie listened as patiently as he could, then put down his spoon and looked at me as if I were hard of hearing.  Raising his voice so I would maybe get it this time, he shouted:

This was more complicated than I'd thought.  Maybe what Frankie really needed was a Theology lesson about how angels are neither boys nor girls, a lesson carefully tailored to a five year old's understanding.  I tried my best to give him just such a dissertation.

When I finished what amounted to a treatise about angels not really being girls, Frankie looked at me over his bowl.  This time he pronounced his words with simple, final, definitive authority.

"Angels are TOO girls.  THEY WERE GIRLS IN MY SCHOOL PLAY.    YUK."