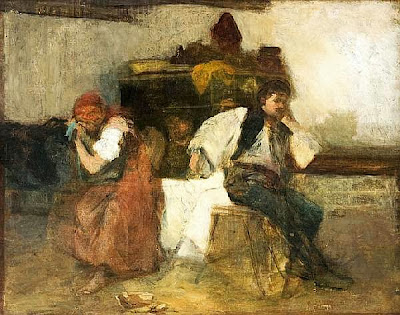 'No one heals himself by wounding another.'

Painting:  Agghazy Gyula, To be Angry with You
Posted by Nancy Shuman at 1:45 PM 6 comments:

I am in a Dry Land 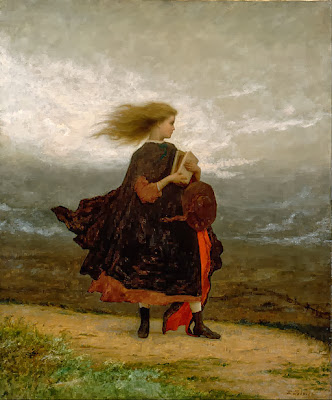 'O my Lord,
I am in a dry land,
all dried up and cracked
by the violence
of the north wind
and the cold;
but as You can see,
I ask for nothing more.
You will send me
both dew and warmth
when it pleases You.'


Painting: Eastman Johnson, The Girl I Left Behind Me 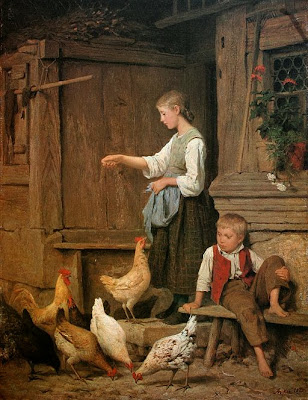 'The big sacrifices are -
comparatively speaking -
easy to make.
It is the little ones
that cost us so dear!'


From In Love With The Divine Outcast,
compiled by A Religious,
Pelligrini, Australia, 1934, p. 258.
A reprint of this book is now available
for purchase online.  For information contact 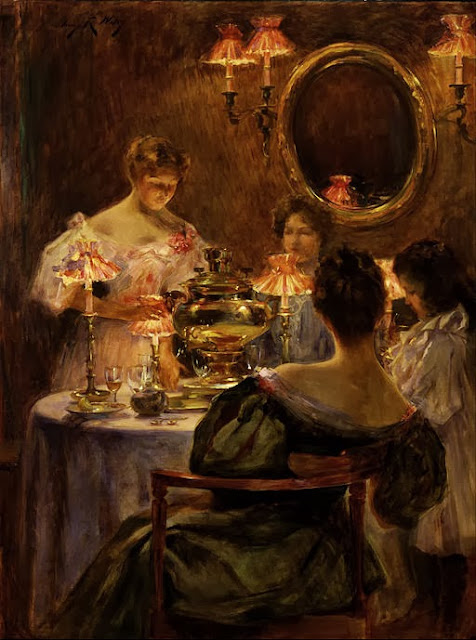 'Words are powerful, they are for weal or woe.  They build up or raze to the ground.  They cut to the quick or they soothe and heal.  They inspire courage and loftiness of purpose, or they rouse to anger, bitterness and revenge... Words!  Words!  How powerful you are!  How terrible you are when lodged in an unkind and critical heart! ... If we have not been perfect in this regard, let us begin now to make a record in charity.  It is never too late to work at our perfection, it is never too late to determine to be saints.  Let us seal our lips against cutting remarks, unkind insinuations, unfavourable words.  Many a heart has writhed in pain because of poisoned arrows that pierced to the core.'

(from Sheltering the Divine Outcast, compiled by A Religious, The Peter Reilly Co, Philadelphia, 1952, pp. 24-25) 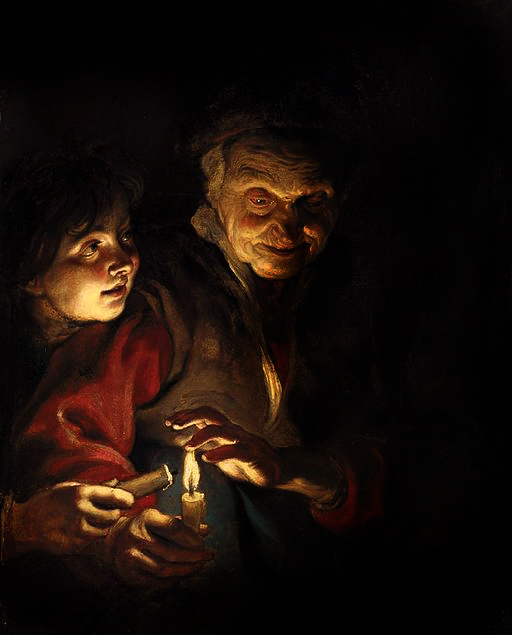 Then We Shall See 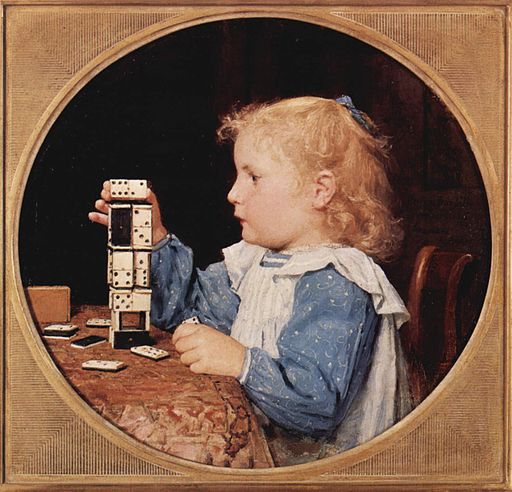 'Soon we shall be in eternity, and then we shall see how very petty are the things of this earth....
When we were small children, how carefully we collected pieces of wood, stone and such to build huts, and if someone knocked them down we cried.. but now we understand how unimportant these things were.  We will feel the same way one day in heaven, when we see that all our preoccupations in this world were nothing but childish concerns.  Be faithful to your duties, but be convinced that there is nothing more worthy or more important than eternal salvation and the perfection of your soul.' 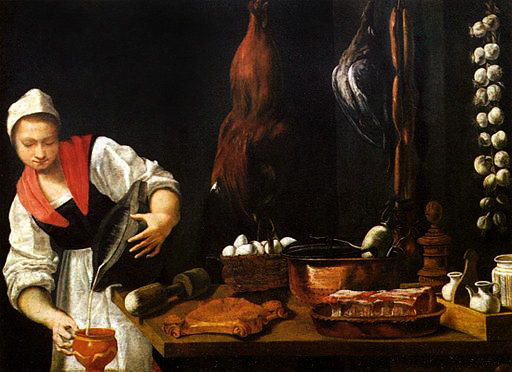 "God is more pleased by one work, however small,
done secretly, without desire that it be known,
than a thousand done with desire that men know of them."

St. John of the Cross

A Religious in the Attic


Someone I know compares the Church's storehouse of spiritual treasures to an attic filled with family heirlooms, ones discovered anew as each generation comes and goes.  Our Church is blessed with devotions, traditions, revelations, stories, truths, and precious gems of faith.  Some of these are emphasized at particular times, while others slide into the background only to resurface a few decades later.  Thus we may find it helpful to “climb up into the attic” from time to time to see if perhaps there might be some treasures we're overlooking.

There are a few people who try to caution us about the attic.  There's nothing but old stuff up there, we're sometimes warned.  Just bundles of old junk not relevant to the world today.  "We don't really have books about saints," I was once told by someone running a Church library.  "Mostly we have modern self-help books and some fiction." I came away feeling like someone whose spiritual ancestors had been forgotten; maybe even erased from the family tree.

One of my favorite books was sent to me by a friend in another country.  She'd rescued it when people hosting a retreat were throwing it into the trash.  It's just an old volume, very "out of date," she was told.  Funny.  I quote this (out of print) book here from time to time, and am often told how much help it has been.  In fact, because of a recent request, I have gone back and labelled blog posts quoting this writer - so now we can more easily find them.  The author, who wrote simply under the name "A Religious," actually wrote a number of small volumes on prayer and spiritual growth.  Thanks to the generosity of yet another kind friend, I'm currently able to borrow some of these titles, one at a time.

If you've ever searched for copies of The Living Pyx of Jesus, or any other writings by this particular author, you know they're rare - and in the neighborhood of $300 per volume (last time we checked) when they can be found.

And someone was throwing one into the trash.

If you'd like to sample some treasures from the heart of "A Religious," you can now do so by clicking this line.

Also:  I have used other short quotes from this writer on The Cloistered Heart, and I've now labelled those as well.  They can be found by clicking this line.

This post (which is an adaptation of an earlier one on "the attic") is also being published on The Cloistered Heart blog today.

We are unearthing treasure!  It's good to have at least the shadow of a map. 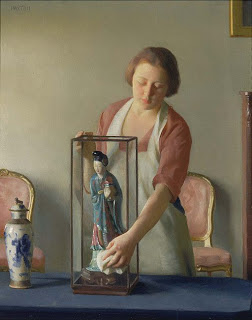 'Each small task of everyday life is part of the total harmony of the universe.'

"Since there is in the Sacred Heart a symbol
and a sensible image
of the infinite love of Jesus Christ
which moves us to love one another, therefore:
it is fitting and proper
that we should consecrate ourselves
to His most Sacred Heart -
an act which is nothing else than an offering
and a binding of one's self to Jesus Christ,
seeing that whatever honor, veneration and love
is given to His divine Heart
is really and truly given to Christ Himself"
Pope Leo XIII


Click here for more about St. Margaret Mary's revelations of the Sacred Heart of Jesus

This post is linked to O Sacred Heart of Jesus, First Friday Linkup

The Prayer, The Answer, The Plane

Until twelve years ago, I had never met anyone "interesting" on a plane.  Oh, I know amazing persons were all around me, but I'd never struck up a conversation with one.

That changed the day I decided to say a prayer.

I felt a little silly, asking for something as trivial as "could I please sit beside someone interesting on the plane?" It was a quick prayer, uttered as I hurried out the door, ready to board a flight to another (American) state.

I don't remember exactly how the seating went, but for some last-minute reason there was a quick exchange. By the time we were airborne, Mr. and Mrs. S. had switched to the seats beside me.

I have no idea how the subject of "Australia" came up.  But here we were, shortly after take-off, going from hello-how-are-you into conversation about a land across the earth.  Mr. and Mrs. S. had never been there; I had.  They said they knew one person in Australia, a lady named Katherine, who was American and had once lived in their hometown.  Katherine had been a neighbor of Mr. S., and a good friend of his mother's when he was growing up.  After being widowed at a relatively young age, Katherine met and married an Australian gentleman.  As Katherine's story unfolded before me, I began to think of Kate.

Dear American Kate.  I'd met her when my husband and I were staying with friends in a tiny Australian town.  Kate was a member of my friends' Catholic parish, was so happy to meet us, and loved to talk with The Americans about "home."  She was elderly, and generous, and we wrote each other after my return to the States.

Mr. and Mrs. S. and their family had lost touch with their friend Katherine, but they'd been so intrigued by how she'd met her Australian husband that they told me more about it.

This was starting to sound familiar.  Why, Katherine had met her husband in the same way Kate met hers.  How unusual.  I told Kate's story to my new friends. The two accounts were identical.

Could Kate and Katherine be one and the same person?  Mrs. S. was astonished at the very possibility.  I mean (she kept asking), what were the odds?  The Australian town was a tiny one, across the continent from Sydney... not a place many Americans happen to visit.  To sit on a plane next to a woman who'd been there and knew their friend would be an amazing circumstance.

Long-story-less-long:  Katherine was (of course) Kate.  And through a last minute switch of plane seats and exchanged addresses, I was able to help long-lost friends re-establish contact across the earth.

Mrs. S. has phoned me several times over the past few years.  In almost every conversation, she has said, still with that obvious astonishment, "we know ONE person in the entire continent of Australia, and we happen to sit on a plane next to a woman who knows her too!?!!"

Of course, the woman sitting next to Mrs. S. had prayed.  Taking a quick minute as she headed out the door, she'd asked for something quite tiny in the grand scheme of things.  Or so it seemed.  Only God knows how it has all played out in the lives of reconnected friends.

Mrs. S. phoned me a few weeks ago.  She wanted me to know that, just after celebrating her 100th birthday, Katherine had recently died.

Always when I think of that day on the plane, I am struck by the power of prayer.  I'm reminded of the truth that anything we ask of God can never be too "small" for His attention.  God answered my tiny prayer in a big way.

I sat beside someone interesting on the plane.

In memory of Kate.  May she rest in God's peace
Posted by Nancy Shuman at 11:03 PM 8 comments: