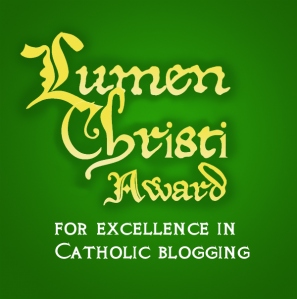 A heartfelt thank you to Amy at Beautiful Whispers of Catholicism for nominating this blog for the Lumen Christi Award.  I am deeply touched and honored.

There are three rules if you accept this award:

Great questions, aren't they?  I love this opportunity to answer them.

(1)  Oh, how I love the saints!  Such examples of courage they are, often in the midst of great trials, but my favorite would have to be St. Francis de Sales.  You probably saw that one coming, as I quote him often.  But why?  I'll try to boil it down, at least a bit.  Bishop Francis de Sales worked tirelessly to spread solid Catholic truth during a time when such was being sorely challenged.  He wrote and distributed truth-filled documents, and became patron of Catholic writers.  He taught that the devout life is not only for those in monasteries, but also for people living in the world.  This was a rather novel idea in the early 1600s in France.  Francis also wrote warm, human, rich letters of spiritual direction to people from all walks of life.  His love of God was obvious.  He founded the Order of the Visitation of Holy Mary, charging the Visitation Sisters to live in "profound humility toward God and great gentleness toward the neighbor" (a call I strive to keep in mind for myself).  Francis de Sales reminds all of us to “Always remember… to retire at various times into the solitude of your own heart even while outwardly engaged in discussions or transactions with others.  This mental solitude cannot be violated by the many people who surround you since they are not standing around your heart but only around your body.  Your heart remains alone in the presence of God.”

(2)  My favorite part of the Mass is the Consecration.  I am speechless in the face of it.  And wordless as I try to write of it.  I think that if we had the merest glimpse of What is really happening in that moment - if the veil were lifted and our eyes of flesh could see Our Lord truly before us - we would fall on our faces and not even know, or care, how we got there.

(3)  My favorite part of being Catholic is the fact that this is the Church Christ founded.  A look back into church history shows that clearly.  I say this as one who has, in the past, read Protestant as well as Catholic church history.  But I must admit that I have another favorite part of being Catholic: the miracle of the Mass.  And if I may be allowed to pick another (admittedly lesser) part, that would be the communion of saints.  Which brings us, in a way, full circle.... and maybe this is where I get to say "thank you" again....

With this nomination, I also have the privilege of nominating another blogger (or more) if I wish to do so.  That's the hard part, because there are so many great ones that I'd like to name at least twenty!  To make it easier on myself, I have decided to go with one.

For its support of authentic Catholic femininity in today's (confused and challenging) world, and for enjoyable writing on a variety of topics related to that theme, I nominate: