Someone Interesting on the Plane 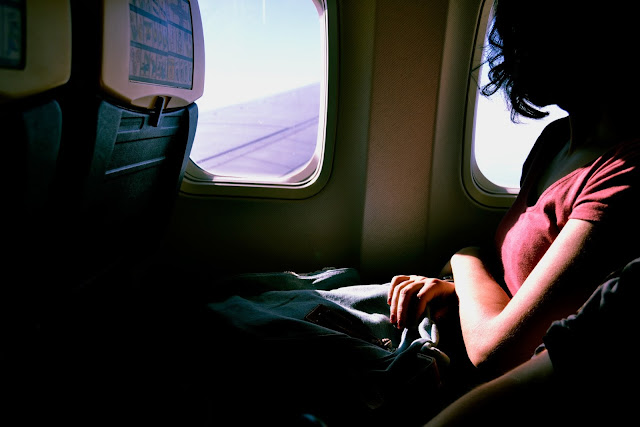 Until fifteen years ago, I had never met anyone "interesting" on a plane.  Oh, I know amazing persons were all around me, but I'd never struck up a conversation with one.

That changed the day I decided to say a prayer.

I felt a little silly, asking for something as trivial as "could I please sit beside someone interesting on the plane?" It was a quick prayer, uttered as I hurried out the door to board a flight to another (American) state.

I don't remember exactly how the seating went, but for some last-minute reason there was a quick exchange. By the time we were airborne, Mr. and Mrs. S. had switched to the seats beside me.

I have no idea how the subject of "Australia" came up (I probably was carrying a souvenir tote bag), but here we were, shortly after take-off, going from hello-nice-to-meet-you into conversation about a land across the earth.  Mr. and Mrs. S. had never been there; I had.  They said they knew one person in Australia, a lady named Katherine, who was from the U.S. and had once lived in their American hometown.  Katherine had been a neighbor of Mr. S., and a good friend of his mother's when he was growing up.  After being widowed at a relatively young age, Katherine met and married an Australian gentleman.  As Katherine's story unfolded before me, I began to think of Kate.

Dear American Kate.  I'd met her when my husband and I were staying with friends in a tiny Australian town.  Kate was a member of my friends' Catholic parish, was so happy to meet us, and loved to talk with The Americans about "home."  She was a refined elderly lady who welcomed us into her home for tea. We wrote each other several times a year after my return to the States.

Mr. and Mrs. S. and their family had lost touch with their friend Katherine, but they'd been so intrigued by how she'd met her Australian husband that they told me more about it.

This was starting to sound familiar.  Why, Katherine had met her husband in the same way Kate met hers.  How unusual.  I told Kate's story to my new friends. The two accounts were identical.

Could Kate and Katherine be one and the same person?  Mrs. S. was astonished at the very possibility.  I mean (she kept asking), what were the odds?  The Australian town was a tiny one, across the continent from Sydney... not a place many Americans happen to visit.  To sit on a plane next to a woman who'd been there and knew their friend would be an amazing circumstance.

Long-story-less-long:  Katherine was, of course, Kate.  And through a last minute switch of plane seats and exchanged addresses, I was able to help long-lost friends re-establish contact across the earth.

Mrs. S. phoned me several times over the years after our meeting.  In almost every conversation, she said, still with that obvious astonishment, "we know ONE person in the entire continent of Australia, and we happen to sit on a plane next to a woman who knows her too!?!!"

Of course, the woman sitting next to Mrs. S. had prayed.  Taking a quick minute as I headed out the door, I'd asked for something quite tiny in the grand scheme of things.  Or so it seemed.  Only God knows how it all played out in the lives of reconnected friends.

Mrs. S. phoned me for the last time a few years ago.  She wanted me to know that, just after celebrating her 100th birthday, Katherine had recently died.

Always when I think of that day on the plane, I am struck by the power of prayer.  I'm reminded of the truth that anything we ask of God can never be too "small" for His attention.  God answered my tiny prayer in a big way.

I sat beside someone interesting on the plane.

This is a slightly updated repost from our archives. I thought of it when I read a kind comment on a recent post.... thank you, Wilma!

Photo via Unsplash.
Posted by Nancy Shuman at 11:41 AM