A Pattern for the Pebbles 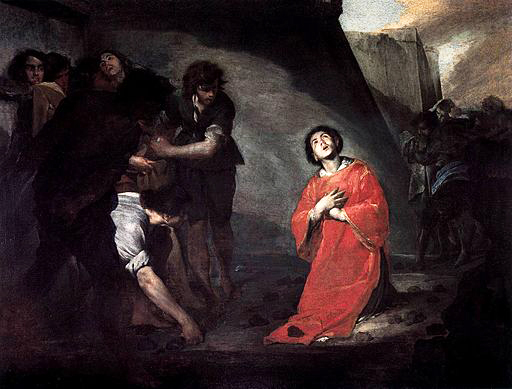 Close to the base of my "spiritual family tree" stand those who have suffered for Christ, those who've given up lives, health or comfort for love of God.

It is only appropriate that such heroes are seen (by all of us) as basic to the faith, for they are exactly that.  As Tertullian said in the third century, the blood of the martyrs is seed for the Church.

It was seed that God planted from the beginning.  St. Paul endured imprisonments, beatings, stoning; St. John was exiled on the island of Patmos; St. Peter was allegedly crucified upside down.

It had all begun with Stephen.

Surely his acute view of reality buffered Stephen's agony as stones were hurled at him.  He was given grace appropriate to the situation, just at the moment he needed it.  I like to remember this.  When I face a trial, God is there.  He gives me just the glimpse of Him that I need, exactly when I need it.  I know this through faith, and I know it from experience.  God stands ready with what I need.

I have never been pelted with physical stones, but I've endured a few pebbles.  Smirks and snickers and snubs for living and speaking the truth of God.  I like to remember that Jesus told us to expect nothing less.  "You will be hated by all on account of Me."  (Matthew 10:22).