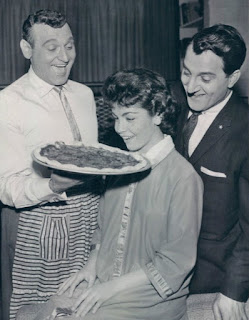 I'm taking a BIG CHANCE.  Feeling in need of a bit lot of pre-Lent silliness, I'm stepping totally outside the breadbox blog-box .. just for today, I promise... and sharing, right here, right now, something I posted on a "just for fun" blog I tried very briefly about a year ago.

After all, today is mardi gras.  A day for celebrating food and smiles and (in this case) my favorite Veggie Tales Silly Song (you surely don't want to miss that).  So away we goooooo.....

Once upon a time, in a land known as 1950s America, there were seven food groups.  Meat, alphabet soup, peanut butter, Twinkies, school lunches, Cheerios, and jam.  Milk was a drink.  Vegetables were something we tried to avoid if we were under 12, and some of us could actually get by with such avoidance if we gagged while trying to swallow lima beans.  If anyone had uttered a weird phrase such as "tonight we're having fast food," we would have figured we'd forgotten it was Lent.

That all changed with the invention of pizza pie.

Oh, I know pizza was around long before Americans "discovered" it; and it was a hit in large cities before middle American towns like mine caught whiffs of its oregano tinged trails.  I was a child when I first heard of it, from my much older sister who was bringing it home for the family to taste.

Funny how clearly I remember that day.  There I was in the living room, jumping up and down on the slipcovered sofa.  My sister had called to say she was bringing something special for dinner.  Which was amazing in itself... I mean, dinner was not something anyone "brought home."  Dinner was tuna casserole or meat loaf.  But the attention grabber for me was that wondrous and magical word PIE.  I had no idea what "peat-zah" might be, but lo and behold.... we were having PIE for SUPPER!

Was peatzah something like chocolate?  O, I most sincerely hoped so.  Chocolate was my favorite, creamy and dark with meringue on top.  Of course, peatzah might be a kind of fruit, like cherries or apples.  Big sister said peatzah pie was "all the rage" in places like New York, and New York was pretty special (I wasn't sure why, but that's what I'd heard).

My first glimpse of this new mysterious pie might have been my first clue.  What in the WORLD was THIS?  No chocolate, no berries, no meringue?  Just a funny looking slab of.... something.... lying limp and flat in a cardboard box.  And what's this red on it?  It doesn't look like cherries. "That's tomatoes," explained Big Sister.  And the yellow stuff was cheese.

I was definitely not about to act like a baby, so I bravely picked up a piece of the greasy weird gruesome horrid non-fruit, non-chocolate, all-the-rage pie and heroically took a bite.

I know that sounds dramatic.  But as a child (I'll admit it), I was just a tad bit  whole lot  .. "dramatic."  Dramatic enough to run sobbing into my room, most likely hurling myself across my bed (I'd seen that in movies, I knew how it was done).  I wasn't even getting DINNER tonight, when I'd been promised PIE!??!!!  Even creamed corn would have been an okay alternative to NOTHING when a person had been expecting some brand new exotic New York kind of FRUIT!!

Eventually, of course, I made peace with peatzah. Pizza parlors were a fun place in my young years. Pizza became (is) my go-to meal on hectic days.

And is there a particular point to this story?  Not even remotely.  Not this time.  I just wanted to write it down.  I hear that's a blogger's prerogative, so I'm trying it out, and with more courage than I had when sampling that first taste of peatzah pie.

The Beast of peatzah .... non-chocolaty, non-meringued, unfruity peatzah pie .... has turned out to be the Beauty of a delivered meal that I don't have to cook.

We are living happily ever after.